Blink or Arlo? That’s a question many will be asking, particularly as Amazon Prime Day approaches, so we’ve created this guide to help you decided which is right for you. Blink – a home security brand owned by Amazon – provides inexpensive, easy-to-fit surveillance cameras for indoors and out. For a relatively small outlay you can cover your home with motion-sensing cameras and access the footage or a live stream through an app on your smartphone.

There’s no monthly charge and the cameras are operated by standard batteries. Arlo is a direct competitor to Blink with a very similar motion-sensing camera system that also provides easy-to-install, battery powered cameras for inside and outside the home. Arlo also provides simple features without a monthly charge, allowing you to check the cameras remotely on your mobile. Arlo – owned by Netgear – is priced a little higher than Blink, but provides a broader device range and collection of features. Both systems are targeted at a large audience looking for an entry-level security camera solution for the home. Let’s take a closer look at what sets them apart. 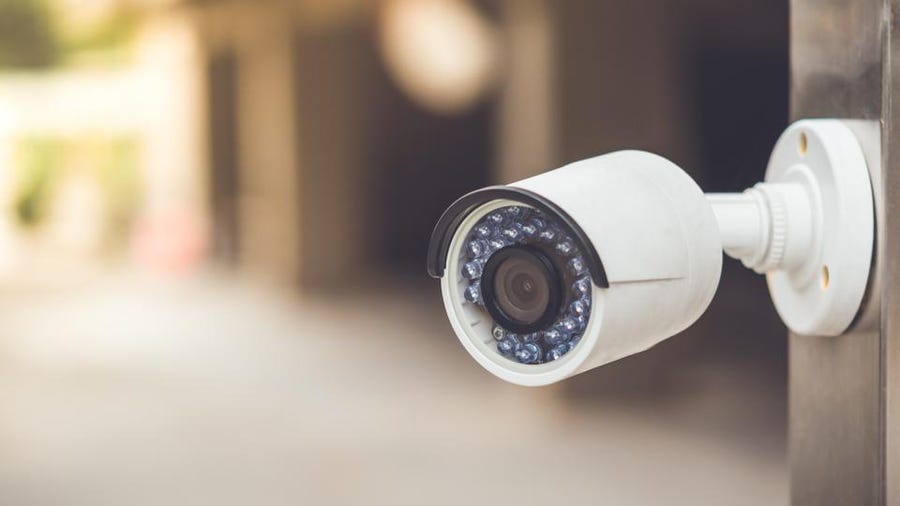 The two are identical, but the XT2 provides some enhancements, such as two-way audio and improved battery life. Blink systems come with a wireless hub, called a Blink Sync Module, and you can connect up to ten cameras to each module. There are no recurring payments. A single camera system from Arlo costs £129/$124/AU$287 for the cheapest entry-level camera, which can be used indoors or out, and you can add additional cameras for $74 / £80 (Australian availability appears limited) (Australian availability appears limited). A three-camera package of the simple entry-level camera will cost you £278.99/$199 (around AU$500). Arlo provides a much wider variety of different cameras including higher quality pro models, which are much more costly and include extra features.

Blink vs Arlo: Types of Camera and Equipment

Although Blink keeps it reasonably easy with indoor and outdoor cameras and some optional accessories, including mounts, Arlo provides a wide range of different cameras and other items. Blink’s indoor camera has motion and temperature sensors, a built-in microphone, and records HD video at 720p. The outdoor, XT camera, adds infrared night vision, is weatherproof (IP65), and can capture HD video at up to 1080p, though it will record 720p by default. The Blink XT2 (only currently available in the US and Canada) adds two-way audio to the mix for talking with people bringing items to you, or barking like a dog at intruders.

See also  What is difference between ring doorbell 2 and Pro? 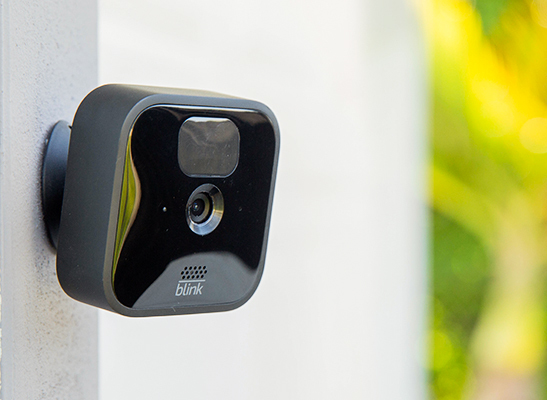 The models come with two AA lithium batteries that give an estimated two year battery life – although the more advanced Blink XT2 would likely be hungrier on the power. The simple entry-level Netgear Arlo has motion sensors, is described as ‘weatherproof’, has infrared night vision, and records HD video at 720p. Every camera takes four Lithium CR123 batteries, which are supplied. The Arlo Pro adds two-way audio and a 100-decibel siren, along with a wider viewing range, USB drive support for local backups, and a rechargeable battery, but there’s also the option to plug it in. However, the Arlo Pro is far more costly at £239.99/$249.99/AU439 for a single camera device. The new, Arlo Ultra , allows 4K shooting, improved night vision, zooming and tracking, and more, but starts at £449.99/$399.99/AU$449 for a single camera choice.

Arlo and Blink have many of the same basic features, but Arlo has extra tech built in. Both products offer wire-free camera models that don’t use any cords at all; these run off batteries which makes them really easy to install anywhere without worrying about power outlets or having an outlet near where you want your cameras placed! Another similarity between this pair is they both provide cloud storage as well as local data capture capabilities for those who would rather store videos locally on their own device–a monthly subscription fee applies depending upon what type of plan one chooses (cloud vs harddrive). Arlo is similar to Blink, but it’s wire-free! That means the camera doesn’t need any cords at all. Instead of using an outlet and power cord, Arlos run off batteries so they’re really easy for installation. You can put these cameras anywhere without worrying about outlets too–they just use some extra juice from your phone instead (which you charge daily).

Once charged up again in a few hours time ,of course! Another thing both brands offer are monthly subscription plans: if security footage scares or worries you then get on board with either service today; no more writing checks Arlo cameras are smarter than Blink. They can tell the difference between people, animals and cars for example with their recognition skills; so instead of just telling you “motion detected” they send alerts that give more information about what happened such as “vehicle detected!” One last thing: if high definition is your thing then Arloids might be perfect because some models come in 1080p quality whereas others offer 720p resolution to satisfy those who crave pristine footage at all times And even better yet – these HD units also let users wirelessly transmit video feed from anywhere within range via WiFi connectivity which means no longer having an outlet or power receptor nearby while still being able capture every precious moment on film The difference between a Blink and Arlo camera is like night and day. Whereas the former only detects human activities, smart devices from Arlos can differentiate between people or animals to give you more actionable notifications with specific information about what they saw in their lens; whether it’s vehicle detection for high definition junkies who want constant updates on where things are going at all times.

The Arlo Pro 3 camera has a higher resolution than its predecessor, and this allows you to select finer details more readily. It also offers zoom capabilities which it uses for tracking your pets or children while they’re moving around the house without losing sight of them in case something goes wrong with another device’s signal! The 1080p video is still able to provide high-quality footage even when zooming in on motion as well – that translates into getting closer shots every time because there will never be any unusable areas due low quality pixels from interpolation like we saw previously; instead only providing us beneficial information via clearer resolutions such things happening against backgrounds where necessary (e censorship). 2K HDR sensor  1080P Video Arlo Pro 3 camera boasts a 2K HDR sensor, while its 1080p eye of the Blink XT2. The difference between these two cameras is noticeable in certain situations where you need to be able identify finer details or zoom out for an overview – but it’s not always clear that there are some limitations with each one as well! The Arlo can take pictures at 1920 x 1080 resolution (Full HD) which gives plenty enough space when printing photos from your smart device app; however if we want any video recording quality higher than high definition then thats going require choosing up either expensive solution: 4k Ultra High Defintion Video Resolution(3840 X 2160 Pixel Rate 30 fps). 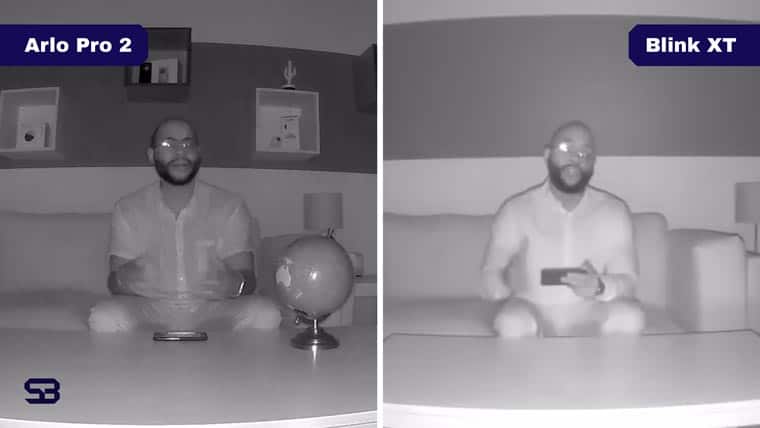 Don’t worry about missing out on notifications when you’re not around. Arlo gives your phone a break and only alerts to things happening in front of their cameras, but not behind them! The camera range has been extended with the new Pro 3 model that can detect human activity by analyzing video footage taken from up close as well as animals moving past. You’ll never miss another important event again because this system is always watching over its territory while monitoring for potential threats such like packages or pedestrians passing nearby- no matter where they may be hiding The Arlo Security Camera System is the best in its class. It can detect motion and sound, monitor your property for humans or animals using heat maps that show where people are located within a certain distance from an infrared light sensor on top of each camera housing, offer 24/7 video recording with alarm detection capabilities through subscription service alerts if anyone enters without permission while you’re away at work – even alert authorities should they pose an emergency threat! The system also comes equipped with two types: one designed specifically for homes (Arlolite) which includes weatherproof wiring; another model suited towards commercial spaces such as businesses employing wide openness around outdoor areas like office lawns. 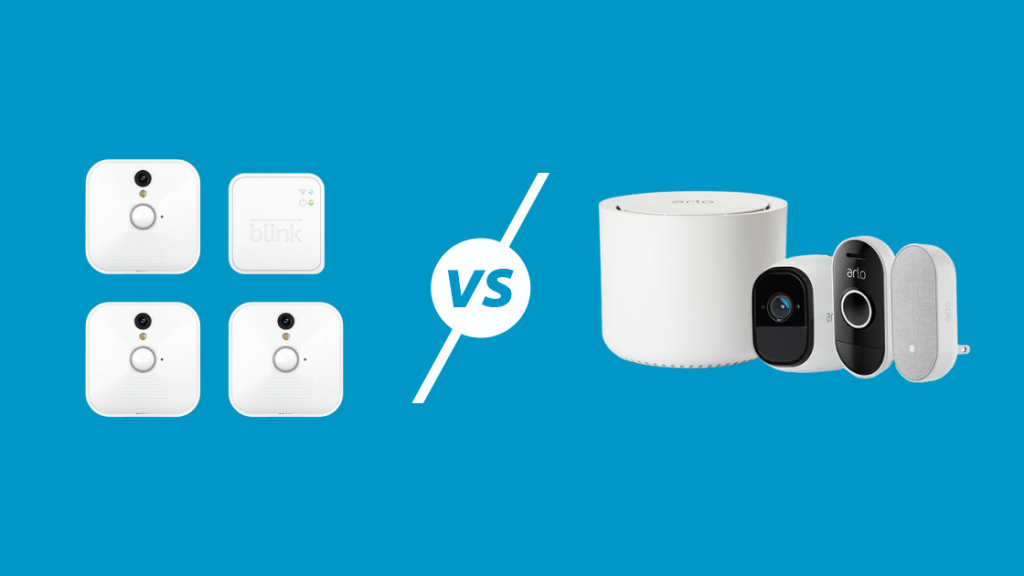 Arlo has many features for your home security and monitoring needs. You can store the video locally on a USB drive, or go with cloud storage through their website at an additional cost per month (depending upon how many cameras you have). They offer different subscription plans based around these options so that certain advanced functions will work best suited to what’s needed in order get maximum value out of Arloothe price point range varies depending if there are just one camera going online as well! Arlo gives you options, certainly. You can store your footage locally with a choice of USB drives or opt for cloud recording and cut down on costs by putting one camera online which offers rolling 30-day storage at 2K resolution £2.49/$2 99 per month while also giving access to advanced features like package detection, motion zones and intelligent alerts that are tied into these subscription plans so keep them in mind before deciding what type is right f Might want more than just an Arlo security system if this is something important !!! You’ll get more features with the Arlo Pro 3 if you buy one.

If that’s not an option, though, Blink offers continuous recording and local storage for your captures instead- but there are some tradeoffs in terms of options: no on-site downloading means all footage is tied up solely to cloud access; also fees aren’t as low due its lack of long term use without subscriptions (though newer videos will be stored indefinitely). The Arlo Pro 3 and Blink cameras both have the same basic features, but there are several important differences between them. The first is what you can do with your footage once it has been recorded: while one camera records continuously without stopping for as long of a period time (the difference in cost), on other devices like these two plus others they provide local storage options that allow for quick downloading by viewing later or editing offline before uploading back onto their respective servers. Another key differentiator concerns ongoing running costs – some models store everything online only requiring an occasional monitor whereas others offer monthly subscriptions costing more per month than just having all video stored locally would be at any given moment.

Despite having higher upfront costs, Arlo offers greater potential for homeowners. With a range of different devices and software smarts that allow it to work with your other home automation systems as well remotely through mobile app access from anywhere in the world or even on-site management at times you’re not present (security guards), its an attractive option if this is something important enough to invest time into researching equipment before committing money! Arlo is a more sophisticated system with greater range of control, but Blink would suit someone looking for an easy and affordable option.